I have been following Paul Carter for almost 2 years now on Social Media. I have read his books Strength, Life, Legacy and Base Building,  as well as worked through a couple of his programs myself. His website Lift Run Bang has some great articles, and if you haven’t read them I would check them out. I have done his 18 week program out of Strength, Life, Legacy, a mass building program, and used his peaking cycles for meet preparation. I have seen great results with each of his programs and realized that I pretty much hit my goals by the end of each one. I invited Paul to come out my facility Evolution Fitness/Tucson Barbell Club for a 2 day workshop to break down some fundamentals in Powerlifting last month and here is a recap of the weekend. I picked Paul up from the airport, and to say the least he is one big MOFO. Wearing his Punisher Tank he pretty much had every head turned at Tucson International Airport. It was a great weekend, myself and my team learned a lot, and I think Paul was just happy to be safe and sound after witnessing my awesome driving skills.

I expected Paul to come in, go over all the details of each lift and have us practice in teams and fix some technique issues. I also expected lots of “F” bombs to be dropped and some talks on programming. I respected his work from the internet, but having someone in person in your gym can really let you know what this person is about. There was a small part of me that was a little nervous. I thought that it was going to be a good weekend, but really if I am going to spend an entire weekend learning I want it to be great. Unfortunately, in the Fitness Industry I have wasted many a weekend and dollars on seminars that I could have taught better myself.

Well, the one thing I was right on was the on point with was the use of “F” bombs. I can’t explain it, but when Paul says pick up the fucking weight g*damit, it carries a specific ring to it that calls for a sense of urgency. I found myself lifting faster and more focused within seconds.

Now to the real stuff we learned. Honestly I would have to write a small novel to cover the depth we went into over the 2 days, but here are a few of the important things that I believe changed me as a lifter.

Training without killing yourself isn’t a new concept. I have heard it over the years time and time again. I guess the difference was how Paul presented it and the fact that he walks the walk. There is also a clarity in not training like a sissy as well. I feel that lots of people take this not training to failure as an out to train too soft.  Keeping the volume high and the bar speed fast, are crucial to seeing consistent gains in strength. Seeing the bar move faster each week with the same weight is the goal sometimes. I know is hard for many of us to do because we always gauge our strength in pounds. When that weight gets easy, do the workout with shorter breaks. When that becomes a joke then move up the weight.

There is a time for strength, a time for size, and the ability to know the difference. It isn’t impossible to get bigger and stronger, but defining  strength goals and programming those goals need to have focus and and understanding of how the body works. This means If I want to put on 20lbs of muscle and increase my 1RM by 25lbs in the next 3 months it may not be possible, at least not lean mass. Increasing my muscle and increasing my 8 RM makes much more sense. Working a solid hypertrophy program pushing the reps with decreased resting times has it’s place in training, especially in the off season. Peaking to 1 and 3RMs, every training cycle isn’t the answer.

Paul made the point consistently that moving the bar fast on all sets, even the light warmups is crucial  to strength. Most lifters don’t miss a bench lockout because they don’t train the lockout enough. They miss the bench because they are fast enough off the chest. If you watch the video of me on the deadlift it is the same thing. Fast reps are crucial. Pretty much if you are not thinking explosive and fast, you are thinking slow, and slow has no place in powerlifting.

As Paul was correcting our technique on some of the lifts over the weekend he didn’t do a major overhauling of most of us. It was literally a foot adjustment of 1/4”, or bringing the hips up a tad bit. Many of us look for these big ground breaking secrets, and for many of us it really was a subtle adjustment that made all the difference.

Long Arms on the deadlift

I would have told you leading up to this weekend my deadlift technique needed some work, probably because I have been stuck at 505lbs for a year now. I thought he would correct my high hips, my leg drive, or my eye position. Nope, he told me to keep my arms long. He wanted them so long that my upper back felt rounded. It wasn’t rounded, but my scapula were as protracted as they could get. Now in that position find tightness. I always knew to protract my shoulders and not squeeze my rhomboids, but my entire pull changed when I heard the cue long arms.

Paul’s exact words… “Every time you pull I cringe. You have to get long in the arms”

I was so worried about being tense in my grip and lats that I was restricting my movement. I was probably making that 500lb bar feel like 600lbs. Tension is king, but creating too much in the wrong places makes a mess. Pavel Tsatsouline talks about this in a concept called dominata. What this means is I was so focused on keeping my lats and grip so tight that actually lifting the bar becomes a secondary task rather than the primary task. When I was keeping my lats tight I was actually making my pull way too long and putting too much strain on other accessory muscles. Without realizing it, my “tight lats” were causing so much tension and I was starting to increase my lower back curve to the point that I was getting weaker. The fix for me right now is focusing on straight leg deadlifts. My shoulders are spread, lats are tight, and my lower back is neutral.

Foot Position on the Squat

Pretty much I have coached myself and my lifters at Tucson Barbell Club to have the toes slightly or moderately angled out. I have watched Rippetoe really coach the toes angled out considerably. Paul looked at me and had me point my toes strait forward. It took him about 30 seconds to give me that cue. At first I was skeptical because I have done it for years and have a pretty solid and strong squat. The result, Im firing out of the hole faster. Since receiving this I have seen it in some of my lifters that have struggled in the squat with toes out. Some do great with angled feet and narrow stance, but I have adjusted a couple of them that have seemed to not thrive out of the bottom and it has made all the difference. 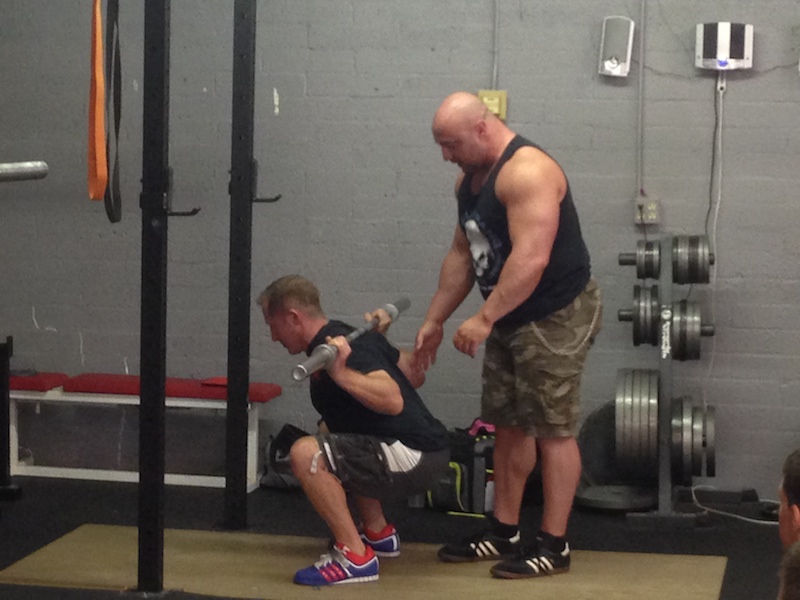 Angling toes out on the Deadlift

I am just going to say, if you think you are getting tight enough on your bench set up, you aren’t. I have taken numerous workshops, and Paul’s drill for setting up was intense. I was going to explain it, but did not want to relive the trauma of setting up again. I would have told you before that the bench is a full body lift with leg drive, tight glutes, and tension. After Paul set me up on my bench I had to decide how important a huge bench is, because it sucked. I am sure my bench would sky rocket, but I think after a few singles of the set up I would have to call it a day.

I was really pleased with Paul’s honest approach and experience with PED’s. Many people in the industry A) Lie about using PED’s which is bullshit or B) Will talk down about them with no experience and have an elitist attitude about using them. He brought an open discussion with his experience, the Pros and Cons of them.

Nothing is Free, Everything has a Cost

He brought this point home throughout the entire weekend. I could name 50 different examples he used, but for each of us it is different and it goes beyond the realm of lifting weights. Whether it is about starting a business, making money, being successful, or becoming a world class athlete, there will be other things in your life that you will have to give up when you have a specific goal you are trying to achieve.

Having said this he really made it clear  doing what it takes to become great at weight lifting isn’t sacrifice, it is a selfish endeavor. Which couldn’t be truer.

It was a great weekend with tons of insight on getting stronger. We covered technique and lots of programming questions in detail, but the best part was covering the mental approach to getting stronger and choosing your path in strength. Paul really made himself available to us to chat ask questions and just be real.

I will close with this, Paul was a great coach  with an amazing eye for form an technique. He isn’t just a strong guy that woke up strong. He really showcased that he knew how to coach and help others become strong. Paul will be spending a week at Tucson Barbell Club in June to do some more intensive coaching an programming. If you are interested contact us for more information. 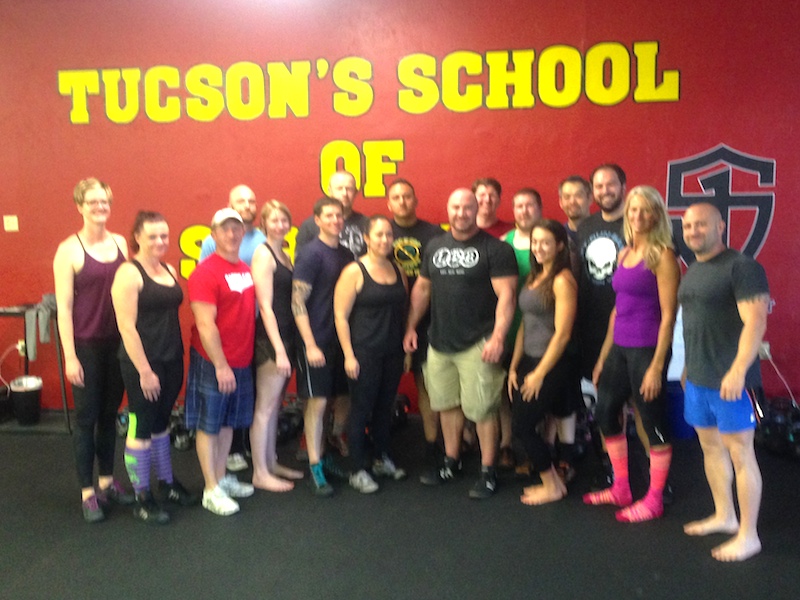