Recently I have made a pretty drastic switch in my training/fitness life. It has been met with questions, opposition, teasing, warnings, concern, and a few other things, so I wanted to share my current training focus and reasoning in this blog.

Over the past many years I have been competing in the sport of Powerlifting. It has been one of the best things I have ever done and has been a very fulfilling part of my life. As an athlete all of my childhood and teenage years I had seemed to lose the competitive spirit.

When I started competing in the sport of Powerlifting I could honestly say I was underpowered. I looked fit, but didn’t have the  appropriate strength for my level of training. Over the years I had a mission to pursue strength as my primary purpose. After each powerlifting meet I reassessed my goals and set newer strength goals, continually raising my standards. In a few short years I went from a guy that had a 325lb deadlift and 285b squat, to squatting 551 and deadlifting 540. These numbers to some seem enormously strong, and to others in the powerlifting world these numbers are called warm ups. To me they were called maxes and I earned every ounce of them. I left everything out on the platform when I hit these numbers. The difference was, when I hit that 551lb squat it was one of the first times I had to take a step back and say, “do I want to squat more than this”? And the answer was “I don’t know right now.” It felt awesome to achieve it, but my body on that last training cycle was going through a lot. Each of us has a threshold and I decided rather than find the crashing point I would take some time off and reassess everything.  I can say for me I wasn’t feeling healthy any more pushing bigger and bigger numbers. Could I have eventually squatted 600lbs? Yep, no doubt, I had to really answer the question “do you really want to do what it takes to get there?”. As for right now, the answer is no. Could that change in the future? Yes. Just being honest with myself, I had to realize that my health wasn’t optimal. I was training specifically for a sport that was starting to take a bit more than it was giving back. I have spent  many years injury free and I wanted to keep it that way.

What was I lacking?

My conditioning was shitty. At times I would joke that 20 rep squats with 325lbs  was my cardio, or my last rep out on bench was my conditioning for the day, but that is bullshit. It doesn’t make any sense, and I don’t give a damn how high your heart rates gets, lifting weights faster is not cardio, that is science, not an opinion.  If you are saying that to yourself you are lying, so  just own it. In January an old neck injury came back to haunt me (I was not even lifting, just taking time off!!) and I really couldn’t lift anyway so I had to focus on what I COULD DO. I jumped on my Concept2 Rower and I found it was the only thing  that didn’t cause pain and actually made me feel better. I started to have more energy and stamina and realized that the little extra conditioning in my life was going a long way. 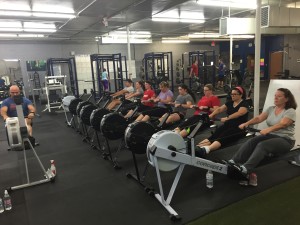 Rowing, the gateway drug to conditioning.

That little bit of conditioning sparked a fire and I started to jog a little bit. I have hated running for years and realized that is exactly why I needed to it! I was a 40 year old man that could barely run a mile, and honestly that is BS. I don’t have any excuse to not be able to  run a mile. If you are young and have the story that you only run if something is chasing you, then you are  keeping yourself down with a story. Realize if something ever does chase you, you won’t be able to do anything about it.  I know I have said it in the past and made myself believe it because it made me feel better about my inability to run.  I realized that all of my “not running”  stuff was ego and not wanting to get out of my comfort zone. I had to prove to myself that I could get better at it and be functional. Running is something that is fundamental to us, and lacking that ability to me was disturbing. If I ever need to run from something I better be able to.  The only way I could convince myself to run was to actually have a goal. A big part of the reason I loved Powerlifting was the fact that it gave me a way to train with purpose and have a competitive outlet. I decided a  half marathon was going to be a huge challenge, but it was doable. January of this year, I could barely run 1 mile at a 10:30 minute pace and I would have to stop because I was so winded. June 2016 I ran 13.1 miles at a 10:20 pace without stopping. Here is the cool part, I did continue to train strength throughout my marathon training, and a week after my race I squatted 450lbs and I had a lot more in me. Running didn’t make me weak. I trained smart only running 2 x per week, and running didn’t injure me either. Running helped me become more conditioned and well rounded.

Maybe this isn’t the right way to state what I am about to explain, but this is how I think about things. We always look at the desk jockey/sedentary individual as an unhealthy person. No one argues that not doing anything physical with your life is healthy, but what about those that push the limits on the other extreme? Competitive lifters, Crossfitters, marathon runners, football players, and even over exercisers (you know those that aren’t elite but train themselves into the ground without a rest day and decide low carbs are the way to go), they really aren’t specimens of health no matter how ripped and lean they are. Instead of sitting themselves to death they push the limits the other way and over train themselves to death.  The other part of this is you don’t have to be world class to experience decreased health with pushing too hard. I visualize this with a bell curve like this: 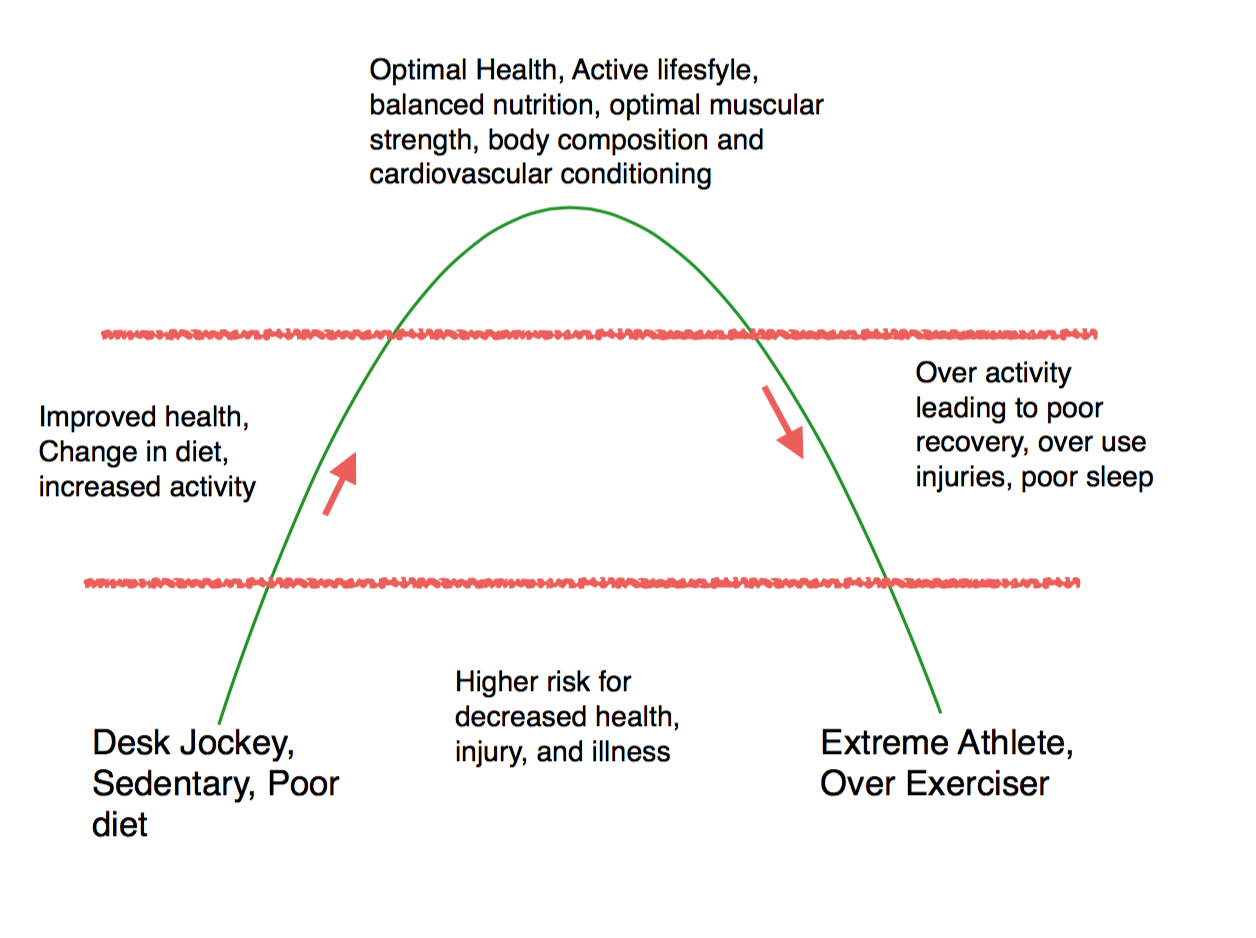 For me I can be honest and say that I was starting to slope down the right side of this graph. I wasn’t Elite, but my I had high levels of specific strength for my sport and little balance. I was lacking mobility, conditioning, and was sitting at a bodyweight about 20-25lbs above optimal. I wasn’t overly fat, but I had too much weight on my body. Though a lot of it was muscle it was still hard on my spine and joints. We can see this scenario with anyone that pushes themselves. It could be too much running, too much yoga, you name it, too much is too much. Yes I have seen numerous yoga injuries over the years, it happens. Though I didn’t sustain any injuries that took me out of training I was very stiff, achy, and winded.

As I was prepping for my race I was constantly being warned that I was going to hurt myself running and that I would lose my strength. Sure, I can’t squat 551 today, but I am not training for it. I can still squat more than most normal humans on this earth and if I ever want to get back to bigger lifts I can. I have continued to  train  to keep my base of strength, and it isn’t in my plans to swing the pendulum to being unhealthy with cardio. It is about bringing  everything into more of a balance for the time being.  I view the balance in a similar curve like this: 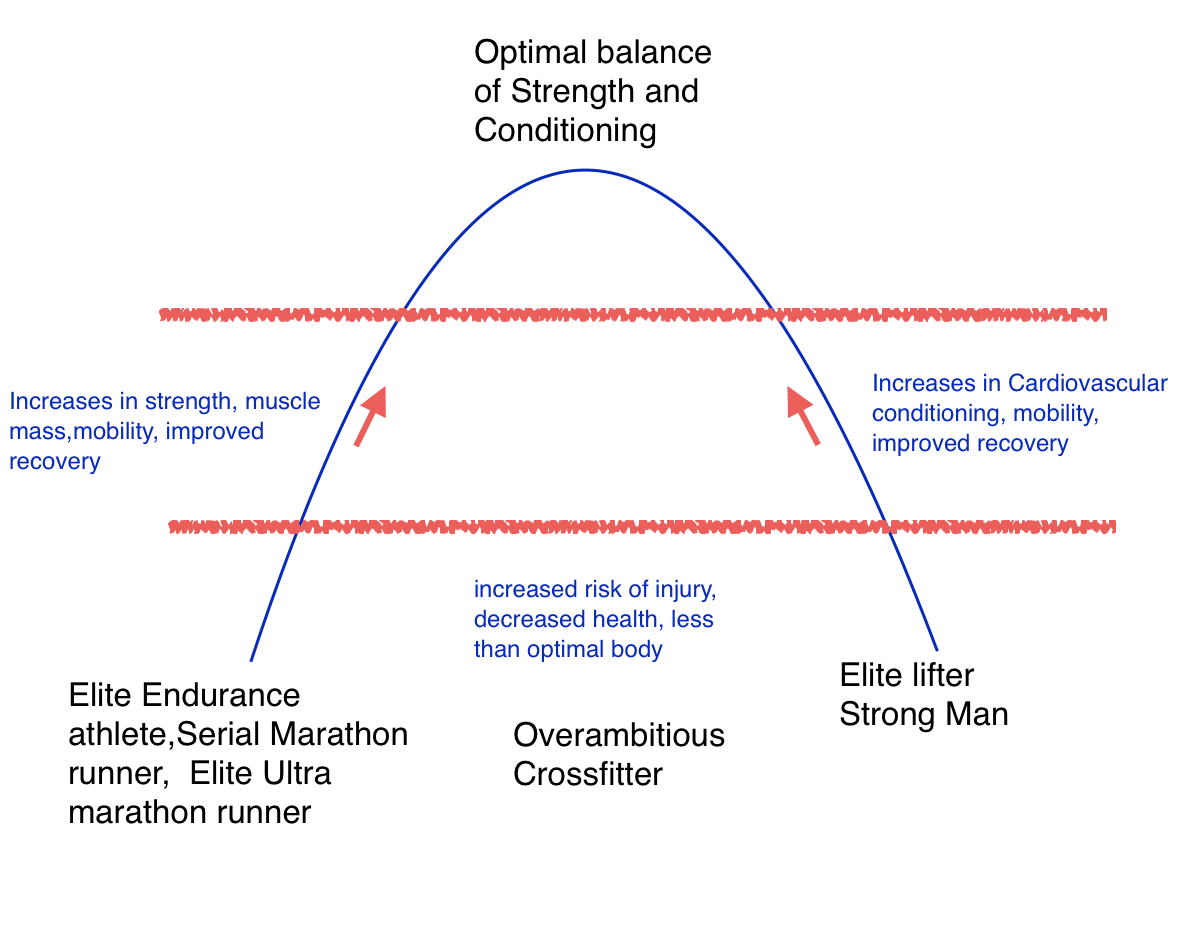 One of the philosophies I am starting to embrace is training myself in seasons. Most world class competitive athletes have training seasons. Football, basketball, soccer, all have a competitive seasons (unless you are talking youth sports and they compete year round in the same sport now which is creating a mess, but I don’t want to go too far off point). I have been structuring my training around different goals and tuning in to my body to make sure I am not over doing it. Since I love competing, I want to structure some of my training  around that. After I completed my half Marathon in June, I began training for my first Triathlon a few weeks after. This has been a great transition for me. It has utilized my base I built for the half marathon and adding the other new skills has been great. I have hired a swimming coach, I am riding a bike, and I am still lifting weights. The cool part about all of this is that I am not pushing extremely hard in any one thing. My swims are challenging because I am still learning. My run volume is half of what it was when I was peaking for my 1/2 marathon, and my lifting is utilizing moderate to heavy weights for lower reps to keep my strength base and I am lifting 2x per week. This phase of learning to swim and building my base on the bike has been great because it has kept my training less about intensity and more about being smart, learning, and tuning in to my body. I will note that having the strength base has been a huge benefit in my cardio endeavors, especially cycling. The best part about strength is that once you achieve high levels of it, strength can be maintained with moderate effort and the carryover is significant to other endeavors.  The same can’t really be said about those that are highly conditioned and weak.   I will most likely compete in powerlifting again in 2017, but I will be sure to not steer too far away from my conditioning base though the total volume of aerobic work will decrease once that happens. 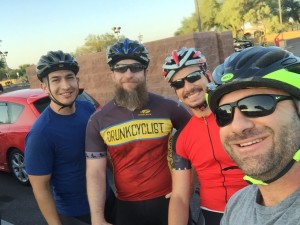 I will end with this, learning new things is a must in this life if you want to be happy and accomplished. Living a mundane life isn’t what I want to be about. There is nothing worse to me than living an OK life.  I remember the first time I held a kettlebell in 2007/2008. It changed my way of doing things and revolutionized not only my training, but also how I train others. This path of learning what it takes to prep for a half marathon and not injuring myself was priceless and it parallels so closely to powerlifting (maybe an upcoming blog). Now taking on swimming has made my brain wake up to learn a skill that is so foreign to me. The adrenaline rush of flying down Mt. Lemmon at nearly 40mph left me speechless.  My brain is opening up new pathways and I feel a lot more awake and alive. It has also inspired me as well as teaching me to be a better coach. Witnessing my swimming coach’s patience with me as well a detail of instruction helps me become better with those I am teaching from the early stages in strength and fitness. To know what it feels like to be frustrated as a newbie gives me a ton more appreciation for the job that I am doing. So the take home message is to keep growing, keep challenging yourself, and find the right balance for you. I know I am loving every second of it!