Eating Clean? Some Things to Consider

Home/Blog/Eating Clean? Some Things to Consider

Eating Clean? Some Things to Consider

Lots of people ask about eating clean and natural foods. Usually they choose to do this because weight loss is a goal. Unfortunately, eating clean doesn’t equate to weight loss. This is mostly because eating too much “clean” food puts you in a caloric surplus no matter how healthy the food is. “Clean” in my opinion is food that is as close to it’s natural state as possible and is pretty much unrefined. I dislike the word clean when describing food as it is misused and a very broad term.  Many people will agree that foods like breads and  pastas are considered highly refined where as almonds are a food that many people are a fan of, especially the whole food and paleo crowd. Here is a big mistake that happens when people want to make big changes and try to surround themselves with healthy unrefined foods. I have seen it too many times. They go home throw out the chips, pretzels, and ice cream and go shopping to fill their houses with “healthy” foods.

I was at Costco the other day and I saw something that caught my eye when looking for almonds.

The first example is something many people would obviously agree on as an unhealthy version of almonds, but you would be surprised how many people will purchase this as a healthy food. Cinnamon Roasted Almonds, almonds with 10 extra grams of sugar per serving(40 extra calories). Now I want to say it isn’t the sugar I’m necessarily concerned about in this situation because I think sugar is bad(I don’t), it is the fact that these cinnamon almonds are made to taste amazing and the problems aren’t with one serving, it is the fact that most people will struggle to stop eating these. It is very easy to eat these mindlessly. Sure, some of it is the sugar, but it is also the cinnamon all the food science behind the exact way these will hit your palate. They are made to be awesome and you will find yourself going for more unless you have awesome will power. 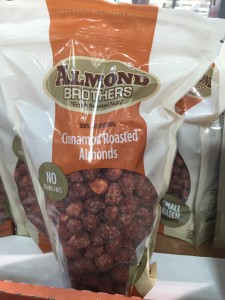 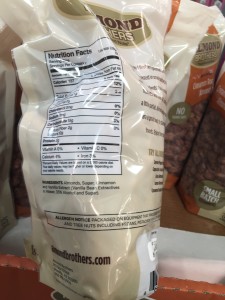 Lets look at the next example. It seems harmless enough, salted and roasted almonds. Pretty simple label, just a little heat and salt. Not nearly as desert like as the previous example and no added sugar, but in many ways these are going to hit the palate pretty nicely and lets just say these aren’t randomly salted and mindlessly roasted. They are roasted and salted just enough to make your palate want more. As simple as this ingredient list is, it is very easy to mindlessly eat these almonds as well.  If you can measure out a serving and stick to it, awesome, but if you have a bowl sitting out on the counter while you watch a movie these have a high likelihood of creating a problem. 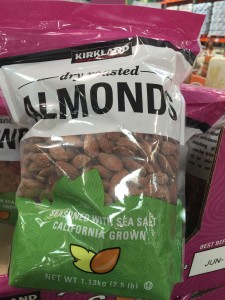 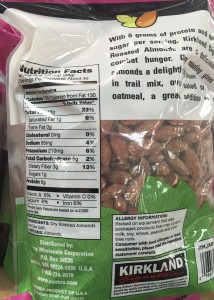 Now here is a better option, but not nearly as fun. Raw whole almonds. Yeah kind of boring. They taste fine, but after a good serving or 2 you have had enough. They don’t have high palatability, and you can easily walk away from them unless you are overly hungry or even worse….. hangry.  These are probably as close as most “natural” eaters will come to eating clean and as some call it “paleo”, but the funniest thing is raw, non-salted almonds really aren’t even the closest thing to natural you can get. They are still shelled and ready to eat by the handful which really isn’t how almonds are found in nature. Here is the kicker of this all. You can’t even find these almonds in the snack section at Costco like the above 2 options. There are 5 different types of salted, carmelized, and chocolate covered almonds in the snack section. I had to walk back to the cooking section to find the raw almonds. Yep, I mean who would snack on regular almonds? 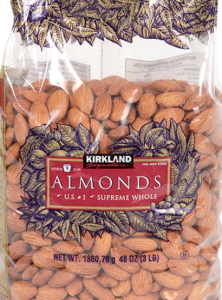 Join Our Email List and Stay in Touch with Upcoming Workshops, Events and Training Specials

For those that want to really feel that they are eating clean, natural, and put themselves in a better position to not over eat then eating almonds from the shell will definitely put a damper on eating mindlessly. Cracking each one and eating them definitely adds to the process of eating them and unlike salted pistachios in the shell. Almonds are a little more difficult to shell and not nearly as tasty without the salt.

To take it even another step further and probably the most hard core. Try eating almonds with the soft skin from the tree still on them. Talk about some work to process your food just to get at it. I wonder how much of these you would over eat? Yeah there is actually a skin around the shell as it is found in nature

I purposely didn’t discuss almond butter because that just adds another aspect of processing the food. So for my paleo friends out there… Eating store bought almonds out of the bag isn’t all that paleo, and those that want to start eating “clean” to lose some weight, I encourage you to look at this continuum and see where your food choices sit? I know for me, I like to eat a little too much at times and the more I look to food as nourishment rather than a sense of satisfaction and pleasure the better choices I make.The less salted, sugared, and processed the food is, the less inclined I am  to mindlessly eat.  I usually buy the unsalted/non roasted almonds and rarely ever buy almonds in the shell, but for me that usually is enough for me to auto regulate my food consumption and not eat like a mindless fool.