Recap of the Sacramento APA Meet

Home/Blog/Recap of the Sacramento APA Meet

Recap of the Sacramento APA Meet

Last week myself and a few friends decided to travel to Sacramento to compete at the APA Powerlifting Meet. Why Sacramento? Well our friend Ric Garcia is the head of the StrongFirst Powerlfiting Team and chose this meet as the site for the first ever StrongFirst Powerlifting Team to compete on the West Coast. Our Friend Ellen Stein was leading a team on the East Coast the same day.  Representing Tucson Barbell Club was myself(Danny Sawaya), Sergio Giardini, and Jacqueline Luciano. We had prepared for the past many months training for this meet. We had some big goals and felt like we had prepped appropriately to meet them.

Sergio, Jackie, and Myself used 6 week linear progression to peak for the his meet and had my last training session about 10 days prior to the meet. The rest did my body and mind good and I was ready to lift heavy. The one catch was I wanted to compete at 198lbs. The problem was I had been weighing in at 204-205 every morning which means I had to do a water cut for the meet. In the world of cutting weight this really isn’t much weight, but I had to make sure to do it right. The Meet was Saturday November 15th, weigh-ins were 4pm Friday the 14th. Since we were flying in Friday morning I had my water cut planned. I had been drinking 2 gallons of water per day the entire week. On Thursday the 13th I ate lunch at 1pm and drank my last cup of water. I ate a small dinner Thursday night(no fluids) and withheld fluids from Thursday afternoon till the weight in Friday night. Around 5am Friday morning I had a rice cake with some peanut butter and didn’t eat anything else. On the airplane about midday Friday I was really starting to feel thirsty, I asked for just ice on the plane and the stewardess looked at Sergio and myself like we were nuts when we were chomping on ice. We didn’t bother explaining the reason. The hardest part was not swallowing the ice. Serg and I didn’t eat the entire day so I was just pleased we kept our humor all day. Jackie managed not to kill us so we did OK. Upon Arrival to Sacramento our first stop was to Walmart to pick up our hydration supplies. Pedialyte, Pedialyte, and more Pedialyte. 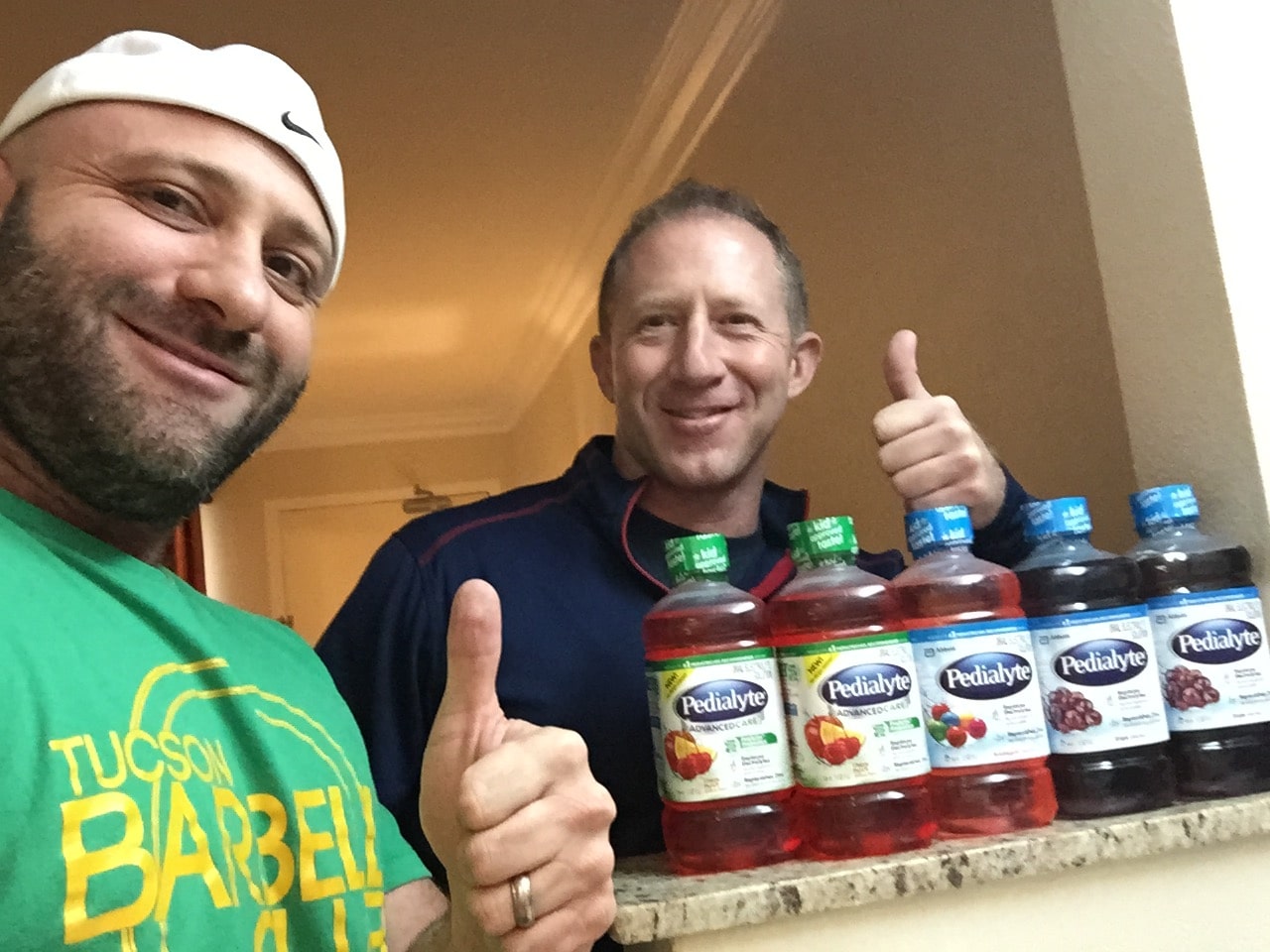 This is where I started seeing the writing on the wall on how the meet was going to turn out. The weigh-ins were set for 4pm. After not eating or drinking for 27 hours I was ready to drink and eat something. I felt my muscles starting to cramp a bit and that could cause a nightmare on meet day. The earlier the weigh in the more optimal for my body to rehydrate. We show up to the weigh-ins at 3:50pm and were told the meet director was running 30 Minutes late which means he was really running an HOUR and 10 MINUTES LATE. It was hard to keep my cool, but I was pissed. I put a chair in front of the weigh in door and secured my spot as the first weigh in. Come to find out when the meet director came that they weren’t using Kilos which would have been nice to know. Why is this important? Well, 90Kg, the weight class used in every other federation is 198.4lbs. The meet director said they are using exact pounds. Upon weighing in they put the scale on a carpet to weigh us which had  me at 198.4. I insisted we put the scale on concrete and my weight was exactly 198lbs. I was pissed, shaky, and really annoyed, but the Pedialyte made everything better.

I learned a big lesson earlier this year in a meet that I dehydrated for. I had a miserable performance and my laziness in rehydrating was to blame. 7lbs of Water isn’t a large amount, but  rehydrating takes full attention and has to be done appropriately. This time around was a much bigger success. First thing is, drink lots of Pedialyte. I drank a half a gallon of it in the first hour after weigh ins. Pedialyte is a sodium based solution with minimal amounts of dextrose and othe sugars. Gatorade and other performance drinks tend to be too sugary. Many studies have shown that Pedialyte is a superior choice for hydrating the body. The other big lesson I learned is not to eat right away after starting the hydration process. Food in the stomach immediately after beginning to hydrate slows the absorption time of water. I waited about an hour and 15 minutes to start eating. Sergio also cut weight for this meet and we pounded water and pedialyte after dinner as well. All and all I had about 1.5 – 2 gallons of fluid that night. The outcome of this rehydration was extremely more succesful this time around.

After the debacle of weigh in that was over an hour late the day before I was ready to lift come Saturday morning. I was fueled with an awesome breakfast and fully rehydrated. The meet was to be capped at 50 lifters and there was only one platform. Under an efficient sytem this meet could be done in 6-7 hours with 50 lifters and One platform. Only One problem, there were 77 lifters… and One platform…. I won’t save the drama, the meet didnt end till 10:30pm. Yep we showed up at 8:30am to get settled and left 14 hours later. The crappy weigh-in had just been the beginning.

I have been to a good few powerlifting meets and many with 80-100+ lifters. Flights are normally between 10-15 lifters. As we looked at the flights we saw 3 groups. Group A: 33 lifters, Group B: 27 Lifters, Group C 20 Lifters. What does this mean??? It means that there was over a 35-40 Minute break between each attempt. I did squat attempt 1 and waited over 35 Minutes to squat again. I can’t explain to you the high suck value of waiting 35 minutes between attempts. First you can’t warm up between attempts. I squatted 485 on my first squat, about 15 minutes later I hit 315lb for a double, 20 minutes later I get under 515lbs for my 2nd attempt. Guess what, it felt awful. Going from 315 to 515 F&^%S up your nervous system. 515 felt like it was going to crush me. I successfully squatted it, but decided to lower my final attempt from 540lbs to 530lbs and I chose to not do any warming up between attempts. 530lbs went up fine, but I had to wait 3 hours to Bench Press. My training Partner Sergio also pulled through and hit a Squat PR of 500 as well!

So without boring you with the details, this day was long. My filght didn’t Start deadlifting till after 7pm at night and my back and body was already tightening up. As I was warming up my deadlift each warm up set felt like a max attempt. I was afraid I was going to have my worst meet deadlift ever. I ended up pulling a small PR of 515lbs, but under better circumstances I would have had another 30lbs in me. Another thing that was pretty off was that a couple of their judges had probably never lifted in thier lives and many of the squats that were white lighted were higher than a Giraffe’s ass. The last draw was when they asked us to find our own back spotters on the squat….. I just shook my head in disbelief.For those of you reading this and have been thinking about doing a meet don’t let this sour you, not all meets are run like this. In the end our team did well. Jackie was sick most of the day but still lifted like a champ and did the best she could do. Even with feeling crappy and a miserably long day she still managed to pull 300lbs on the deadlift. I have seen her pull 330 faster, but under the circumstances she did great.

Ric Garcia our good friend from Modesto California and Co-Owner of Full Force PT had a tough day on the Platform, but he still went out and put in an a great performance. weighing in at 132lbs it was fun watching him out squat numerous guys that outweighed him by 50- 100lbs.. The best part about Ric was even though he wasn’t having the day he had planned for he stepped up and stayed positive for everyone else. He turned his coaching head on and was helping us analyze some of our lifts and helped us set our attempts.

At the end of the day I have to say I met some pretty cool people at this meet. Clay Edgin from Santa Cruz Strength was a great guy and was fun to lift alongside of, he provided a lot of motivation.  Also met some other pretty strong guys like Shay Guiod that were great to lift with. In the end Sergio finished with 1300llb total at 180lbs  (500squat, 315bench,485 deadlift), he took first in masters and 2nd in the Open. Jacqueline Luciano finished with 650lb Total (220/130/300) and 3rd in her weight class. Ric Garcia 930 total (345/240/345) and 2nd place in the open. I finished with 1370lb Total (530/325/515) and took 1st place in the 198 Open. I personally came up a little short on my goals, but I still set some Personal records. All in all with a pretty poorly run meet it was really a fun day to be with my great friends on the Platform. Many people think Powerlifting is an individual sport, but have a team to train with definitely changes the experience. 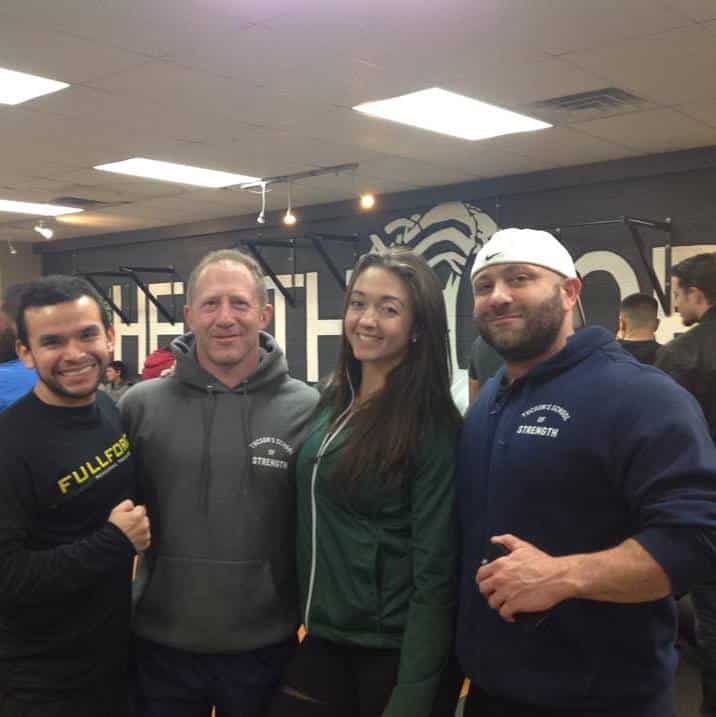